Chianti, one of the most renowned Italian wine areas is located in the central part of Tuscany. The origin of the name Chianti has been the subject of many interpretations, one of which connects it to Etruscan populations (Clante) who populated these territories in ancient times and of which traces are still found among the rows, rivers, woods and hills that enrich this beautiful landscape.

Chianti originally identified itself in a small area with indefinite boundaries in the center of what is today the Chianti Classico. Hence the use of the name Chianti to identify a wine with the particular characteristics that is today famous around the world. The first documents reporting the name Chianti connected with wine date back to the 13th century.

Subsequently, the use of the name Chianti gradually extended to surrounding areas which were subject to various successive delimitations, until 1932 when the Italian government entrusted the task of officially defining the production area of Chianti wine to a specific commission. Various sub-areas were identified: Classico, the central area of the oldest tradition, Colli Fiorentini, ColliAretini, CollinePisane, ColliSenesi, Montalbano and Rùfina and subsequently Montespertoli and Montalbano. 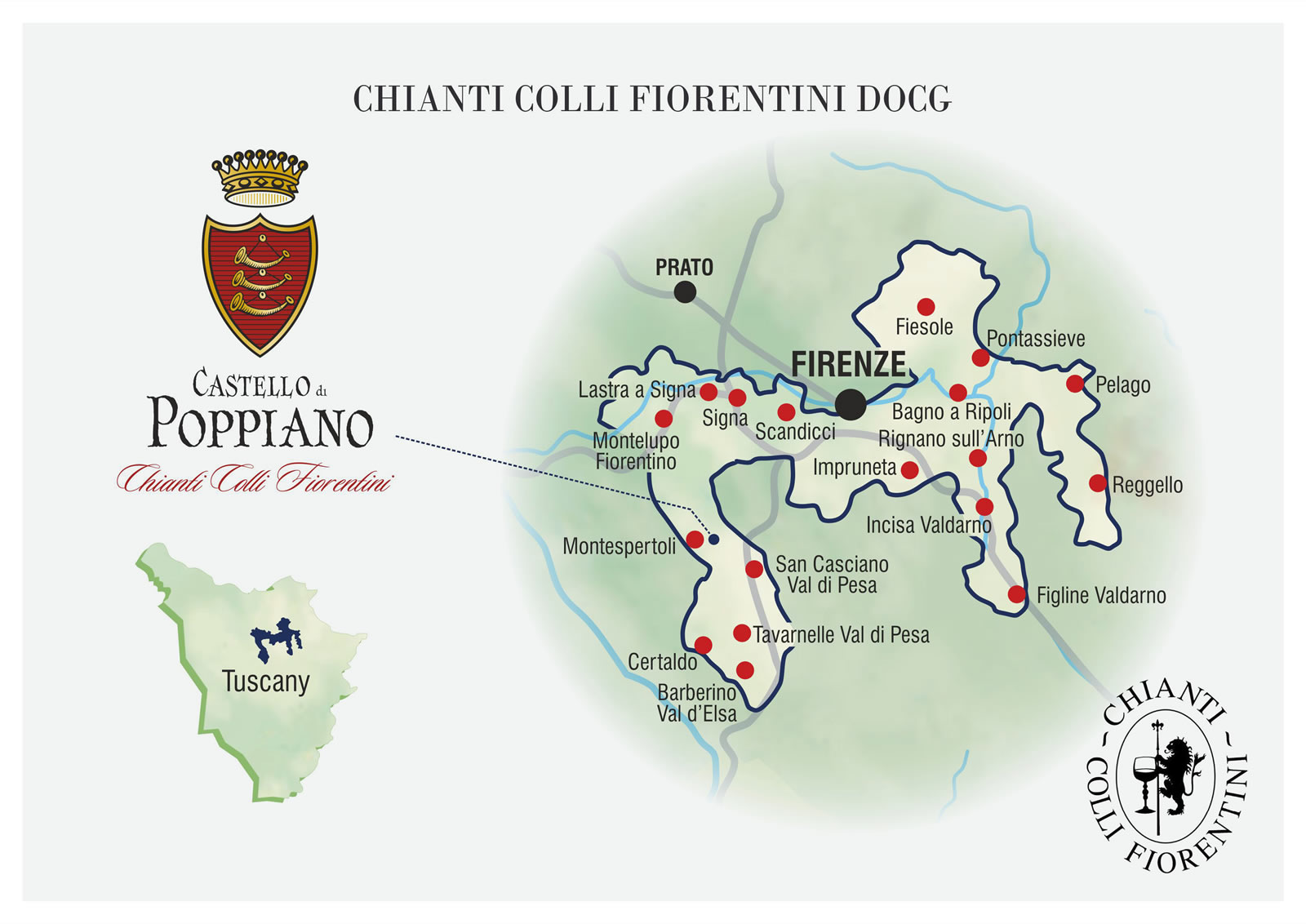 The rolling hills that embrace the city of Florence to the South East and South West are the setting in which the Chianti Sub-area most linked to the history of the city itself is born: the Chianti Colli Fiorentini, the area where the wine that was produced since ancient times was it was called “vermilion” or “vinumflorentinum”.

It is a strip of hills with an altitude between 150 and 450 meters and land with a prevalence of alberese and galestro. Its vineyards stretch between stately villas and medieval castles, witnesses of a past that made the silent Florentine hills protagonists, by proximity, of the development of viticulture and the wine trade in the “city of the lily”.

Many ancient and noble Florentine families, including the Guicciardini, have contributed to the development of the Florentine hills thanks to the care dedicated to their agricultural properties. A story characterized by the work and love of those who have inhabited and cultivated them since ancient times. The DOCG Chianti Colli Fiorentini, recognized in 1932, is regulated by a more restrictive production disciplinary than the plain Chianti DOCG.. Its distinctive mark is the lion symbol of Florence on the flagpole of the tower of Palazzo Vecchio.
A peculiar characteristic of Chianti Colli Fiorentini Docg is its pleasant drinkability, freshness and adaptability in combination with food combined with a particularly elegant and fine structure. 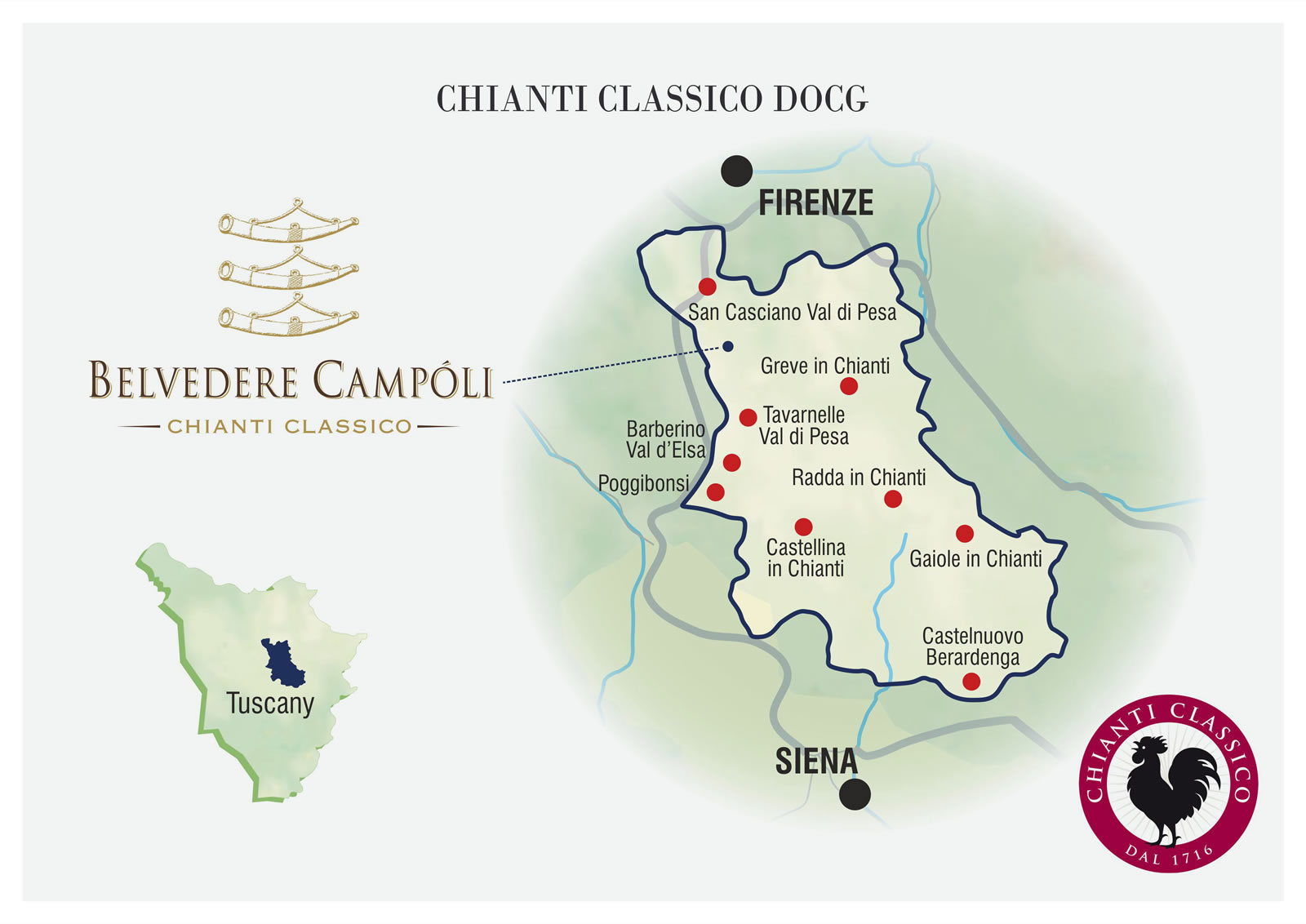 At the origins of Tuscany: the Chianti Classico Docg

The history of Chianti Classico has its origins in the distant Middle Ages. At that time, the Florentine Republic established a military alliance to regulate, control and administer the current territories of the Chianti Classico production area.

The effigy of the Lega del Chianti was a Black Rooster, the current hallmark of Chianti Classico wines. The origin of the Black Rooster is linked to an ancient legend. The story tells that in the medieval period, when the republics of Florence and Siena fought bitterly to prevail over each other, the Chianti area was the subject of bloody battles. To put an end to the disputes and establish a border, a challenge was issued: it was agreed to have as many knights leave from the two cities and to fix the border at their meeting point.

The departure had to take place at dawn and the starting signal would have been the crowing of a rooster. The knight from Siena chose a white one, while the Florentines a black one, which they kept closed in a narrow and dark cage, almost without food for a few days. On the day of departure, as soon as the black rooster was released from the cage, exasperated, he began to crow vigorously long before sunrise. His song therefore allowed the knight of Florence to leave before his challenger, accumulating a considerable advantage. The Siena’s knight traveled only twelve kilometers and soon met the Florentine knight.
Thus it was that almost all of Chianti passed under the control of the Florentine Republic. Today Chianti Classico represents the symbolic wine of Tuscan viticulture. Sangiovese, which must be present at least for 80% in Chianti Classico wines, the absolute protagonist in its ancient formula, has a deep, decisive, complex character. 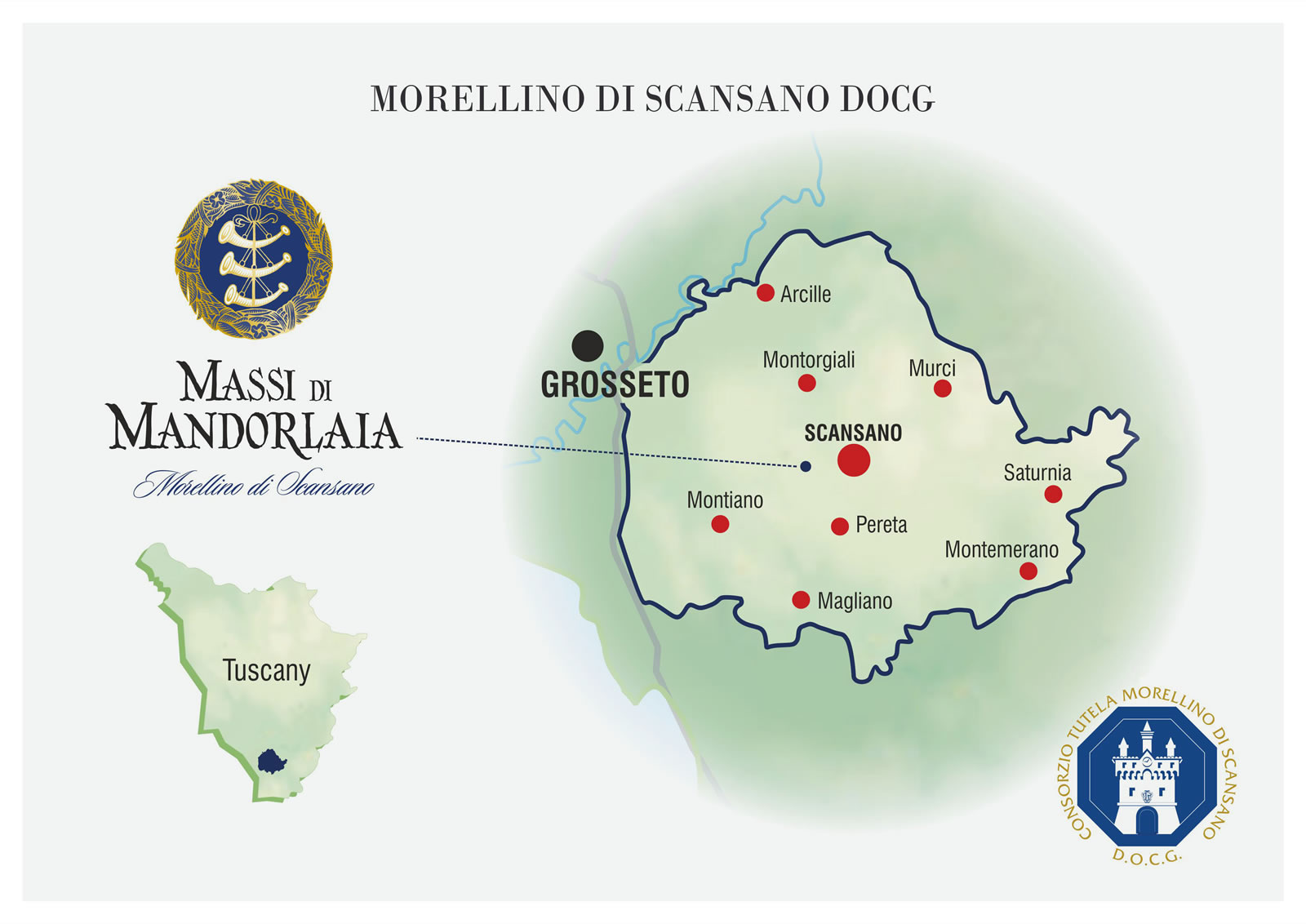 There are traces of the word “morellino” since 1700, when some winemakers from Scansano, a town on the hills of the Maremma hinterland (central part of Tuscany reagion not far from the Tyrrhenian coast, began to identify their wine with this name.

According to tradition, the “blacks”, horses with a dark coat were very common in Maremma. The intensity of the coat color and the vigor of these horses are reminiscent of the color and personality of the wine produced in these areas. The numerous archaeological finds dating back to the Etruscan period, found in the areas of Scansano show how the production of the vine was important since ancient times. Scansano became an important center in the nineteenth century when the administrative offices of the province of Grosseto were transferred to the Scansano hill to escape malaria, a disease that was widespread in that area at the time.

This is also the sign of the beginning of the wine diversification of an economy that had hitherto traditionally been agro-pastoral. Another important period was towards the end of the second millennium when substantial investments were attracted by the wine-growing potential of the area. The typical Maremma landscape unfolds on land of rare beauty with vineyards that intersect between dry stone walls, hedges, streams, in unspoiled nature.
It was a decidedly oriented path towards quality, which in 1978 received the recognition of the Controlled Designation of Origin (DOC), then crowned in 2007 by the Controlled and Guaranteed Designation of Origin (DOCG).